Requested to translate a poem

> Hi there, a friend of mine gave me your email as a way to
> translate Chinese to English.  I have attached a picture.
> Can you help? 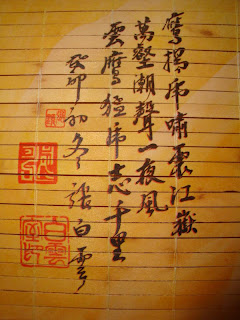 This is a poem. So my translation may be crude by the literary standard. It goes like this:

Normally, a poem should have four lines. I don't know why this Mr/Ms Zhang only had three.

Some interesting comments extracted below:

(About an altercation provoked by a stranger trying to cut in line) While Confucianism brings family members extremely close to each other, and also friends to some extent, this religion or philosophy alienates strangers, i.e. people of no family or friend relationship, beyond indifference and sometimes to the extent of hostility.
...

(About scenery of the Three Gorges for landscape painting) What puzzles me and the people I ask everywhere is that these stunningly beautiful mountains and thousand-feet high cliffs never went into ancient painters' vision, even though famous poets in the Tang dynasty wrote about them. This can't be explained in the same way that Jiuzhaigou or Guilin of natural beauty no less than that of the three gorges was also not in ancient paintings, because the latter were either physically inaccessible in ancient times, or rarely stepped on due to occupation of a non-Han civilization.
...

(On viewing the exhibition of the Sino-Japanese War) Not all feuds are created equal. Forty years after the Korean war, Chinese and American then pilots could meet and chat about their air fights as if they were playing a game. During the 1979 China-Vietnam war, soldiers reportedly exchanged canned food during the intermission of a battle or perhaps lunch time. But the two belligerents of the Sino-Japanese war would never come to terms in this life or the next, as if a threshold of human indignation was surpassed.
...

(On visiting Dazu Rock Carvings) unlike Christianity or Islam, Buddhism does not exclude other religions, and the Chinese religions or doctrines care even less whether you worship another god or God privately or publicly.

Posted by Yong Huang at 9:56 AM No comments:

I'm organizing a database user group (formerly Oracle user group) at my work place. One trivial question comes up. Should it be "Database User Group" or "Database Users Group" with plural "Users"? While people are making comments with respect to English grammar, I thought it would be helpful to check how most people say on the Internet. So here it is my email to them:

Although how people say on the Internet doesn't mean it's grammatical, it's at least statistically more popular. So we can use that as a reference. It looks like more people prefer the singular "user group". When it's broken down to a specific type of user group, all that I checked except Linux and UNIX people prefer singular. (No wonder UNIX and especially Linux people are the most likely associated with geeks in this society.) My conclusion of this search: the geekier and less coherent the members are, the more likely they prefer plural, "users group".

According to http://www.dict.org, "insight" primarily means "A sight or view of the interior of anything", as in "He had an insight into almost all the secrets of state." According to http://translate.google.com/#en|zh-CN|insight, however, the Chinese translation is "洞察", or "慧眼", "内省力", "眼光". But it does not sound natural when you substitute 洞察" for "insight" in the Chinese translation of the above sentence ("他对国家的几乎所有秘密都有洞察"). In fact, a far better choice for this word is "真知灼见", i.e., valuable views about something ordinary people cannot have thought of. The words "慧眼", "内省力" and, "眼光" are even more remote from the true meaning, because they mean the capability to gain the insight, not insight itself.
Posted by Yong Huang at 6:06 AM No comments:

The Chinese sentence is playing with the multiple meanings of the word "聪明". In “xx學生不是不聰明，就是不好好學” (It's not that the student XX is not 聪明, only that he didn't take time to study.), "聪明" means having high IQ (intelligence quotient), as that could be determined by the rigorous psychological test. In the sentence "不知道時間的寶貴、學生時代學習機會的難得而只是貪玩，這是最大的不聰明" (It's the biggest non-聪明 to not know the value of time and the opportunity of study as a student, and to play all the time.), "聪明" means wise or 明智. In both cases, you could use the English word "smart" just like "聪明" in Chinese. But if you think about it, the exact meaning of the word in either English or Chinese is different.

Playing tricks with words sometimes can impress people and give others thought-provoking ideas that sound clever, smart or 聪明. But those words should be taken as nothing more than clever talk.
Posted by Yong Huang at 10:07 AM No comments: