What language is popular? A revisit

Four and half years ago, I checked language popularity based on the number of shelves for the foreign language books at a local Borders Bookstore here in south Texas. The result was as follows:

The Borders bookstore was closed down soon after that. Recently I went to a local Barnes and Noble store and checked the foreign language books just as I did before, and the result is:

The following is a summary of the two sets of data (Spanish is excluded; the numbers less than 1 and 0.5 are artificially set to 0.8 and 0.4, respectively): 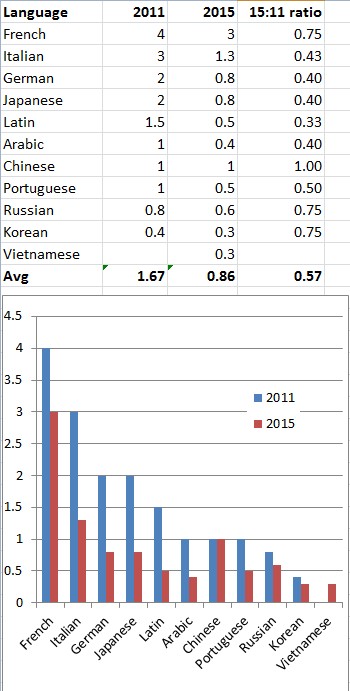 It's probably safe to assume that the two bookstores carry approximately the same total number of books. Then we see that either foreign language books are genuinely sold less in 2015 than in 2011, or the two stores have different focus, i.e., Barnes and Noble cares less about these language books than Borders.

But more interesting is the difference in change for specific languages. Of all that have data for both years (excluding Spanish), only Chinese has kept at the same level, taking one full bookshelf in both years. On average, the 2015-to-2011 ratio is 0.57. Relative to that, Chinese is way above average in books to be sold, and French, Russian and Korean are above average as well. The rest are attracting lower customer interest now than before, Portuguese > Italian > German = Japanese > Latin. Latin, with the biggest drop, occupies one-third of the space on the shelf after elapse of four and half years. There may be a shift of people's interest away from pure intellectual enjoyment to practical economic benefit.

This is of course a crude way to measure language popularity. Commercial bookstores such as Borders and Barnes and Noble make an effort to meet the demand of the market but there's no perfect, up-to-the-minute, match.

For completeness, here is another measurement of language popularity, based on an April 2014 poll of what language the language-loving people are studying conducted in the Polyglots group on Facebook, which had 16,000 members at the time. The popularity order,

is obviously different from the bookstore popularity in 2011 or this year. For one, the stores are in Texas, where the presence of Spanish is particularly strong. Secondly, the market-determined popularity may differ from that in the Polyglots-poll because the latter is more of a reflection of the fun or leisure time enjoyment, not necessarily going along with the economic development in the region where a specific language is spoken; while studying Chinese may increase your chance to find a job in the global market, it may not be as much fun as studying the sexy Italian. It would be interesting, though, if the Polyglots group could conduct a poll every once in a while, so that we could see if the fun factor could also go up and down as the usefulness does. It probably will, but on a much smaller scale.

Posted by Yong Huang at 2:15 PM No comments:

On a proposed new name for China combining Mainland and Taiwan

Xi Jinping of Mainland China and Ma Ying-jeou of Taiwan, two top leaders on each side, had a historic meeting on November 7, 2015. It was an unprecedented event to ease the tension across the Taiwan Strait since one government split into two in 1949. Some people on the Internet are excited about making up new names for a possible merger of the two governments.[note1] It would be unfair to reuse either of the current names

if such merger were to happen. Of all possible names proposed in the half-serious half-hilarious online discussions, "中华共和国" merits linguistic and historical analyses. The first component of this neologism, "中华", combines the central theme of the names from both Mainland and Taiwanese governments, and represents the common cultural element that ties both sides together. Generally translated as "China", it literally means "central" or "middle" (as in "Middle Kingdom") and "flowery beauty" (see Name of China).

The latter component of "中华共和国", i.e. "共和国", is not that straightforward. It is the third component of the compound word "中华·人民·共和国", but superficially differs from the second of the compound "中华·民国". But are they truly different and how? Confusingly, both governments take "Republic" as part of the official English name. While English "republic" most commonly maps to "共和国" in Chinese, the Wikipedia 共和制 article states that "在東亞有一些共和制國家也以舊譯「民國」为名" (In East Asia, there are some republican states that take an old translation "民國" as their names.) So "民国" as a general term (as opposed to a proper noun) is simply an alternative translation of "republic". The problem of this one-to-many relationship, "republic" translated as both "共和国" and "民国", is that "中华共和国" will have to be translated as "Republic of China". But that English phrase has already been taken; it's the official English name for "中华民国". While the Mainland government may be happy with the Chinese name "中华共和国", its potential English name "Republic of China" would be a horrible choice precisely because of the conflict with the English name of the current Taiwanese government. (This reminds me of cybersquatting in which people register Internet domain names in the hope of selling them for a good price later. But the Taiwanese government of course didn't do this intentionally and had no intention to make money out of such good English name.) I have not found the originator of this English translation for "中华民国". A message was sent to taiwan.gov.tw asking for help but I have yet to receive a response. Apparently, soon after 中华民国 was established in 1912, both "Republic of China" and "Nationalist China" were used, but the former prevailed as time passed by, even though "Nationalist China" is literally closer in meaning.

The English word "republic" comes from Latin "res publica", meaning "public affair(s), public matter(s), public thing(s)" (not "people's public affairs" or "people's affairs" as some sources claim). Over time, it has evolved into the modern sense of "a form of government or country in which power resides in elected individuals representing the citizen body and government leaders exercise power according to the rule of law" (from Wikipedia Republic). The Latin source of the word does not inherently conceive its modern meaning, nor does it map to Chinese "共和国" or "民国". So we just need to examine the relationship between the modern meaning of "republic" and the two Chinese translations. "民国" is an easy term, literally "people's country" or "people's state", or a country "of the people, by the people, for the people". On the other hand, "共和国" is more complicated. "共和" as the name of the political system was coined by Japanese scholar Bankei Otsuki (大槻磐溪) referring to Gonghe Regency when the Zhou Dynasty was ruled jointly by two dukes more than 2000 years ago.[note2] This translation using Kanji characters was later brought into the Chinese vocabulary as a loan word. Now, it's clear that neither "共和国" nor "民国" is a perfect translation of "republic" in its modern sense, in terms of intension (not intention) of the words. But "民国" as "people's country" is definitely closer than "共和国" if understood literally; why a country ruled by two dukes would in any way be likened to a modern republic is beyond me. Unfortunately, for unknown historical reasons, the Chinese word "共和国" is actually very much more common as a translation of English "republic" and "民国" has fallen out of fashion.[note3]

In short, the proposed name "中华共和国" is a good one in Chinese. But its translation in English and all other languages with a writing system not directly based on Chinese characters pose a curious challenge.

_____________________
[note1] The Mainland government calls the Taiwanese counterpart "authority", not "government". But that's a point beyond my interest.
[note2] Nowadays more historians seem to attribute another event at the very beginning of the Chinese chronology, i.e. 841 BCE, as the source for "共和". This is called "共伯和干王位" (The Count of Gong named He ruled as a regent.).
[note3] As a proper noun, "民国" is short for "民国时期", referring to a historical period, either from 1912 (beginning of ROC) to 1949 (beginning of PRC) used in Mainland, or from 1945 (beginning of ROC's rule of Taiwan) on.

Posted by Yong Huang at 1:48 PM No comments: